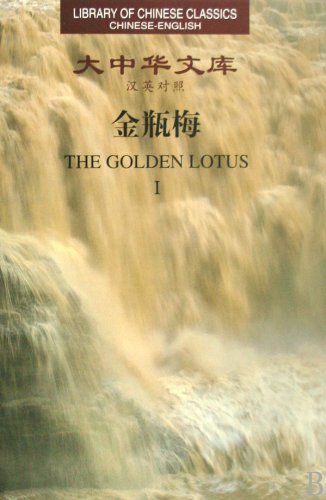 The Golden Lotus by Lanling Xiaoxiao Sheng (also known as Jin Ping Mei or The Plum in the Golden Vase) in the five book hardback set from Library of Chinese Classics. This book is in English and simplified Chinese and is a wonderful addition to any library. There are approximately 2500 pages and this set of 5 books was published by Renmin Wenxue.

About the Golden Lotus

The Golden Lotus describes the downfall of the Ximen household during the years 1111–27 AD. The story centres on Ximen Qing, who is a corrupt social climber and lustful merchant wealthy enough to marry a consort of six wives and concubines. The Golden Lotus named after one of the central female characters, Pan Jinlian(Jinlian means Golden Lotus). Within Chinese societies, Jin Ping Mei was considered to be pornographic material up until the Qing dynasty. After this, it was re-evaluated as literature.

The Golden Lotus is part of The Library of Chinese Classics and there are over 60 books in the series so far.