Creation of the Gods in the four volume hardback book from Library of Chinese Classics. This books are in English and simplified Chinese and is a wonderful addition to any library. Creation of the Gods was published by the Foreign Languages Press in 2001 and there are over 2000 pages. 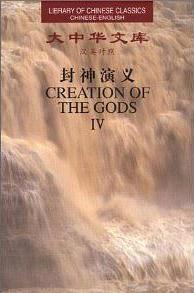 Creation of the Gods
Creation of the Gods (also known as The Investiture of the Gods or Fengshen Bang) is one of the most popular Chinese classics of mythical literature. It is rumoured that the author, Xu Zhonglin, spent all his money on his first daughter and decided to write this book for his second daughter. Creation of the Gods was written towards the end of the 16th century. In Creation of the Gods, there are many stories in which many gods, goddesses and immortals came to the Earth and changed the fate of everything with their magical power.

China was a country in which most people were polytheists believing in numerous gods of the Three Realms-Heaven, the World, and Hell. The gods ruled over everything and were created to satisfy the needs and desires of the people. Most of them were historical national heroes and upright officials who had been canonized so that they became heavenly deities sent to the world to deliver mankind from misery.