Guanzi in the four volume hardback set from Library of Chinese Classics. This book is in English and simplified Chinese and is a wonderful addition to any library. This set of Guanzi was published by Guangxi Shifan Daxue Publishing House in 2005 and there are 1691 pages. 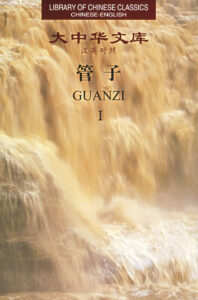 Guanzi
Guanzi was written over a very long period and in 26BCE Liu Xiang edited these 564 writings, getting rid of repetitive content and selecting 86 for posterity. After that, 10 of the selected texts were lost. There are now 76 works in existence.

Many researchers believe Guanzi to be the work of the Legalists of the State of Qi(1046 BC – 221 BC). This collection contains not only the thoughts of the Taoists, Confucians and ancient Chinese thinkers specializing in the art of war, it also contains thoughts on Yin-Yang, the Five Main Elements, astronomy, the ancient calendar, education and agriculture. The economic thoughts and ideas of Guanzi make this collection unique among all classical Chinese documents. This version for Library of Chinese Classics is the first complete English translation of Guanzi.