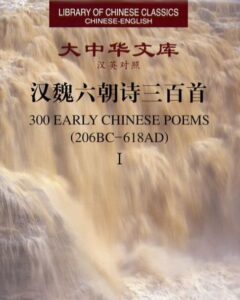 300 Early Chinese Poems (206 BC – 618 AD) in the two book hardback set from Library of Chinese Classics. This book is in English and simplified Chinese and is a wonderful addition to any library. There are approximately 547 pages and this set of 2 volumes was published by Hunan Renmin Press in 2006

This anthology of over 300 poems from the Han Dynasty to the Sui Dynasty (206 BC – 618 AD), give us a glimpse of Early Chinese poetry during this period. This was an important time in the growth of Chinese poetry and the poems in these years continue the fine tradition of The Book of Poetry and The Verse of Chu. 300 Early Chinese Poems also gives a vivid panorama of the social reality of that period in Chinese history. These poems attempt to explore new genres and ways of versification and lay the foundation for further flourishing and development of Chinese poetry in the Tang Dynasty(618 AD- 907 AD).

In this volume the 300 Early Chinese Poems have been selected from 6,000 extant poems in order to present an overview of the poetry during this period. Poetic styles include the yuefu in the Han Dynasty, five-syllabic and seven-syllabic poems, the pastoral poems, and rhythmic poetry. It is truly an interesting collection and the Chinese-English mirror format enables readers (whether Chinese or not) to appreciate the beauty and majesty of the poetry.

300 Early Chinese Poems (206BC-618AD) is part of The Library of Chinese Classics and there are over 60 books in the series so far.